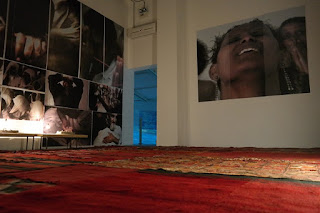 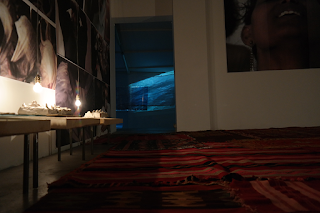 Beton7 Gallery presents Katerina Athanasiou's solo exhibition entitled “(test) in between”. The artist’ s new work develops in three spaces. The solo exhibition a personal research becomes a collective project: with reference and conciliation with the architecture of the space, a particular individuality reveals itself, which is attributed to the interaction and collaborative practices.
At first, the artist welcomes the visitors by inviting them to participate in a specific performance intervention by the artist Lea Petrou. The audience is invited to participate in a process of choice related to colour and taste, which converts the viewing of the piece into a living experience.
Then, the viewer encounters a large wall piece by Katerina Athanasiou, based on her personal collection of photographs by Tassos Vrettos, as well as Petros Batsiaris' red carpets environment, exploring the contemporary ways of worship. The artist redefines a new frame for images and objects by other visual artists, creating a new place, and invites us to experience the deep sense of faith during a ritual ceremony, freed from social structures and restraints.
Finally, in the third gallery space, the artist invites us to contemplate, to make an imaginary trip, facing the endless, moving away from the body, based on a perspective that fills our consciousness with seduction and becomes a site of worship. The face no longer matters, in contrast with the headless body of ecstasy, where the face is closer, next to you.

You darkness by Rainer Maria Rilke
You darkness, that I come from,
I love you more than all the fires
that fence in the world,
for the fire makes a circle of light
for everyone
and then no one outside learns of you.
But the darkness pulls in everything:
shapes and fires, animals and myself,
how easily it gathers them! -
powers and people -
and it is possible: a great energy
is moving near me.
I have faith in nights.

Katerina Athanasiou was born in Athens. She studied sculpture in the Athens School of Fine Arts 1996) and completed the Graduate Program Digital Art forms (ASFA - NTUA, 2001). In 2008 she created the idea of “City Travellers, http://artcoursescitytravellers.blogspot.gr/, a collective place where people meet and experiences. The group was formed in 2010 by Antonis Lakidis (painter) and Panagiotis Papadopoulos (philosopher). The citytravellers browse the city and create models, uses and spaces. Since 2007 they are involved in mediating collective works - actions.
Katerina Athanasiou projects involvie in situ works (2001-07) and performances (2008 - present), while the recent research refers to performative environments and to Methodology for the Documentation of Contemporary Art. She has collaborated with Beton7, Artwall, metamatic: taf., Booze Cooperativa, Agathi. She prepares his second solo exhibition (the first was in 2006), inviting artists whose work will complete her composition based on credit, using pre-existing images with some or perhaps no conversion.